Join us Thursday, October 1, 2015 at 10:15pm edt for another episode of Current Status. During this Episode of Current Status co-hosts Theresa Miller, Phoummala Schmitt talk with guest Ruben Spruijt (@rspruijt), CTO of Atlantis Computing and Citrix CTP.   The IT landscape is always evolving and changing. History has shown that the technology trends of the past are not the trends of the future.  See the full post here

A hot topic recently is business continuance.  For businesses today, it’s more than recovering from a Disaster or failed systems. Businesses want and need to be operating seamlessly when issues strike. It’s about Business Continuance. Keeping the operations running. Continuing operations in spite of challenges that your business may face. These challenges can be anything from cloud outages ( AWS outage…), weather related or even an act of God like the Papal visit this week in Washington DC, NYC and Philadelphia. Organizations in these cities have been planning for this visit to ensure business operate as normal.

Developing Business Continuance plans takes time and many different departments must come together to develop the plan. It’s not a  one person job. It takes teams to ensure it is successful. From the IT perspective, it is beyond making sure the servers are running but also making sure users can still connect and will this have a $$ cost added to any existing infrastructure. Will the current environment and/or hardware be sufficient or does the BC plan require additional licensing and software?

As you may be aware, in my current position I work in Center City Philadelphia. The Papal visit has had us make some adjustments and prepare accordingly. Many things had to be planned because access to center city buildings were being closed Thursday & Friday. Roads and bridges into the city are limited or  even closed , which will last until Monday at noon. This means thousands of workers in the city of Philadelphia are not able to go into work as normal on 2 business working days. No work means loss of productivity and loss of $$$. As part of BC planning to ensure we operated as normal as much as possible, IT had to do some planning. Items that had to be factored included but not limited to :

This wasn’t an easy task and took lots of planning from many people beyond IT, that spanned over the course the year. Many people have expressed to me how interesting this was and wanted to know more about what we did and how others planned for this sort of event. So… to answer some questions and gain insight into business continuance,  Why not have Current Status do an episode on this topic!? I think I can arrange that ….

Join us September 24th, 2015 @10:15pm EST  for Episode 27 of Current Status . We are joined by Jay Gagné, CTO Of Razor Technology (@jaytgagne)  to chat about the challenges businesses face with developing business continuance plans and what they can do to overcome them to maintain continuing operations. We will talk about how companies like the one I work for prepared for Pope’s visit and Jay’s insights on how other businesses can prepare for similar events.

On September 10th, Microsoft announced the official release date for Office 2016 as September 22, 2015. According to a blog post by Julie White Julie White, general manager of Office 365 technical product management, Office 2016 will be “broadly available” starting Sept. 22 and Organizations with volume license agreements, including those with Software Assurance, will be able to download the new version beginning Oct. 1.

The blog post also mentions that Office 365 Home office and Personal edition will be able to manually update starting September 22, however automatic updates for these editions do not start until October 1st. These release dates do not leave much time for organizations to prepare to be updated. The new version boost of new features and changes that can have some administrators scrambling to attempt to control the nest.

Office 2016 takes on the new update process of Windows 10, with the updates through the concept of branches. For organizations that currently control how their Office 365 deployments are updated, using an internal source, this will need to determine which branch they will use. The three update options:

Some additional enhancements to the new version of Office 365 is the support for Background Intelligent Transfer Service (BITS).  BITS helps control network traffic when updates are deployed by using idle network bandwidth in that it can increase or decrease the rate at which files are transferred based on the amount of idle network bandwidth available. BITS can be configured regardless of the source of the update, such as an internal source or Microsoft CDN. Microsoft has yet to release the specific details on how to configure BITS, according to the blog more details to come soon. Office 2016 also has added support for Data Loss Prevention (DLP) and Multi-factor Authentication.

Preparation yourself to be Updated!

As with any new software release there is always gotchas and Office 2016 is no different. Knowing the gotchas is have the battle to a successful upgrade and less headaches.

The Office 2016 install is bigger with core installation files at a whopping 850mb and an additional 200mb for any language packs. This means longer installation times. Monitor and review your network accordingly because who wants the network to go down because of office upgrades?

Now that you know what to look out for on a successful Office 2016 update go get prepared to be updated!

This year myself and co-host Theresa Miller  @24x7ITConnect  both attended VMworld 2015 and Tech Field Day Extra. While at the conference we were able to host a live stream of our weekly podcast #Current Status. Live streams are always fun because you never know what is going to happen, especially at a conference with over 23K attendees. We were also happy to have Justin Warren, @jpwarren from the land down under as a special guest co-host. Thank you Justin and though you brought us no kangaroos! 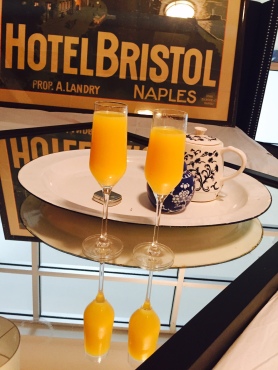 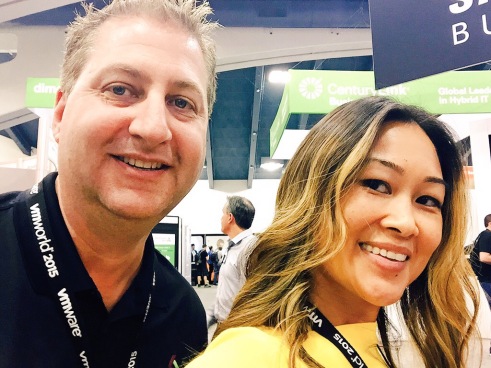 In pure #Current Status style we even had glasses of adult beverages! Given the time of day our live stream was at ( 11:45 am local time) we had mimosas instead of our traditional wine. None of the less it was a fun show filled with plenty of surprises guests.

Check out the recorded stream to see guests such as :

AND of course the famous Head Geeks from Solarwinds!

Check out the fun we had! 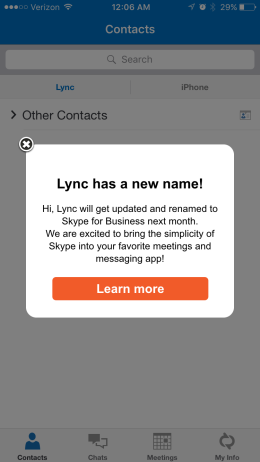 Skype For Business is coming!

After clicking on the “Learn More” button, I was redirected to Microsoft’s support page which announces the new app and has some FAQs.

Some key take aways are:

Can not wait to see how the new version works compared to the somewhat buggy Lync 2013 iOS version.  Here is a preview of what the new mobile app looks like! 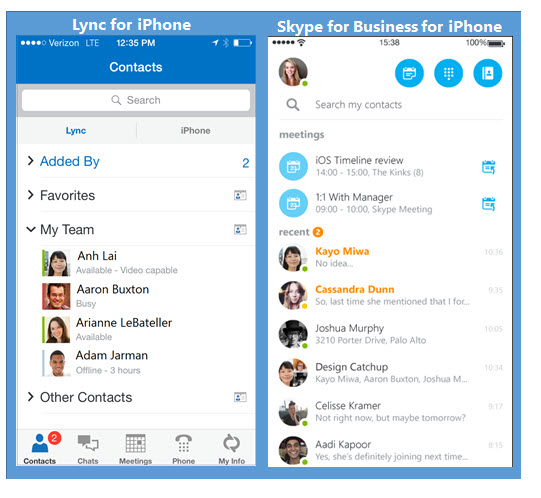 Skype For Business for iOS – New Look and Feel

Office 365 ProPlus deployments by default are configured to automatically update. This can be a good or bad thing depending on how you look at it. Good, because you are always current and up to date on the latest fixes and security updates from Microsoft. But bad for organizations that have an enterprise patching process that has testing and validation for patches and updates. These types of organizations need to have control to establish compatibility and support across many platforms.

Some key settings to look at include:

Enable Automatic Updates – allows you to disable Office 365 from automatically updating. Be careful when using this option as you could miss out on security updates.

Update Path – This setting controls the source of where the Office 365ProPlus installs get their updates from. If this setting is not configured or left blank it will default to Microsoft’s CDN. If you have an internal source, such as network share, then you would include the path here.

Using Group Policy allows some flexible like applying patching sources for different groups of users, such as pilot users and production users. It also doesn’t require manual changes on each system and can make a change across multiple devices with 1 policy. Group Policy is useful when there are many deployment methods across your organizations but you want to manage the application without adding cumbersome deployment steps. If you decide to make a change later, update the Group Policy setting by using the Group Policy Management Console. The updated policy settings are automatically applied to Office 365 ProPlus, through the normal Group Policy update process.

However, between the announcement in March and the actual release dates a month later it didn’t leave much room to test the update and prepare users for the impending changes. Depending on the size of the organization this can be challenging and has caused some headaches for administrators like myself as we quickly tried to prepare. Today we will discuss these challenges and things to consider with the new Skype for Business.

The Skype for Business re-branding was a great marketing and business move for Microsoft. Leveraging a familiar consumer brand that has already shaped how people communicate and combining it with an existing enterprise unified communications platform, one can only expect an increase in business and easier user adoption. Making improvements and adding new features only sweetens the deal.

The new and improved features include:

For those us not on the bleeding edge of change, thankfully Microsoft provided ways to delay the update. You can either block the update from being downloaded from Microsoft updates or use Powershell Cmdlets that would provide administrators to control the updated change to Lync clients.  Lync Servers can be prevented from being updated by not installing the update.

Spoiler Alert for anyone that has blocked the update from being downloaded!

My Skype is Broken!

Since Skype and Skype for Business are two separate products you can run both versions together on the same computer. In organizations that have BYOD or allow non-business applications to be installed on company computers, this could be a headache for the helpdesk. Take for instance a user calls in saying they have an issue with Skype. The help desk will need to remember to identify which version of Skype the user is calling about or they could be troubleshooting the wrong Skype.

Skype for Business is easy to upgrade to using the in-place upgrade option but there are considerations that should be taken into account when you do in place upgrade. Does your current hardware meet the requirements for Skype for Business? An in place upgrade does not guarantee performance will be the same. The upgrade also adds the call the quality dashboard. A component that was not in the Lync deployments and requires an additional SQL database.

Overall I think it’s a great move on Microsoft’s part with the re-branding, even with it’s a set of headaches, will allow companies to communicate better with each other and their partners they do business with. With some communication and planning an upgrade or deployment of Skype for Business can be successful.

aka. The Exchange Goddess

Just trying to survive in IT as a woman. I'm a Systems Engineer with a focus on Messaging & Collaboration, Virtualization, Storage and those nifty little devices called "smartphones". Always ask why? When you stop asking why is when you stop learning and challenging yourself.